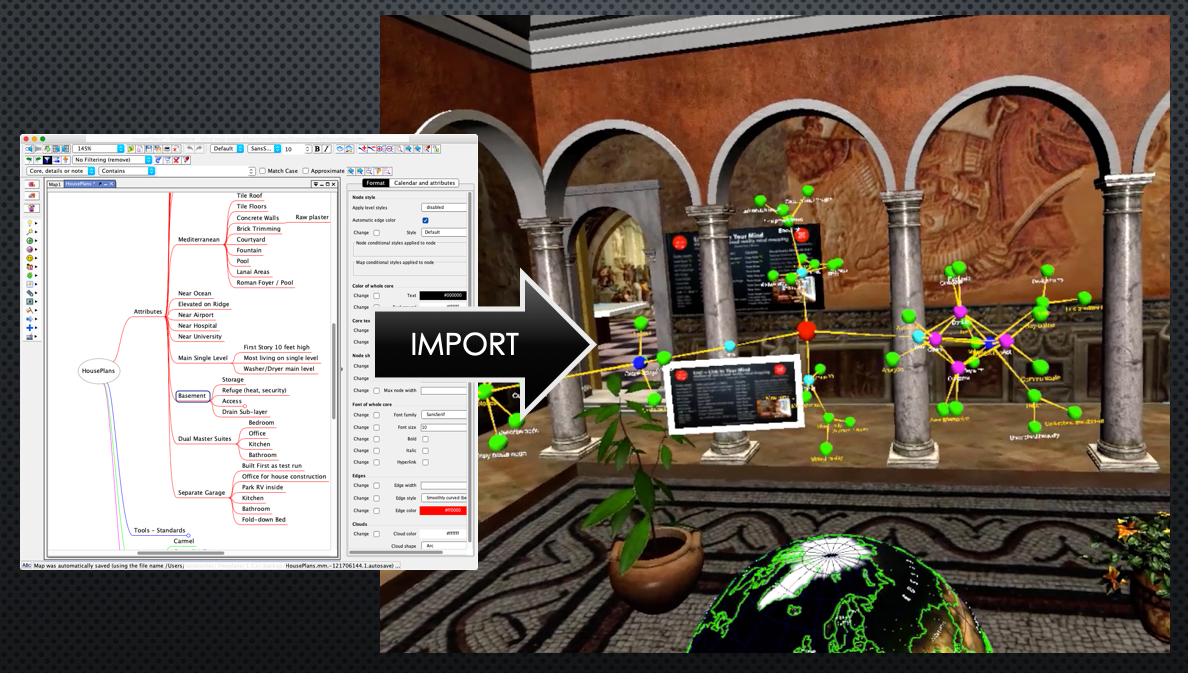 Loci currently imports three file types; MindManager, Freemind / Freeplane, and GraphML.  Here we provide an overview of the formats, our import of the format, and usage in Loci.

Loci has its own file format based on JSON, which has the file extension *.loci.  It supports concepts of graph, node and edges for general graphs.  Our initial import capability imports nodes, implicit MindMap relations (links), explicit relations, colors, urls, notes, and titles, and 2D positions where possible.

The Loci voice command to import is to say “Load Graph” which will use the system file browser to find files with extensions Loci can import.  Once imported, you may wish to use “Graph Reset” followed by “Graph Layout” to use our force directed layout in 3D.

The MindManager format has the extension *.mmap and is actually zipped (compressed) xml based text.  It is generally a strict mind map format and not a full graph format, in that it expects one or more central nodes.  MindManager is a capable 2D mind mapping tool for Windows, Mac, iOS, and Android that has scheduling capabilities, and different 2D views.

The Freemind and associated Freeplane format has the extension *.mm and is an unzipped xml format file.  Like MindManager, it expects central nodes, with implicit links (edges) to nodes nested within it.    Freemind and Freeplane are  java based open source 2D mind mapping tools available for Windows, Mac and Linux, and are widely used as an intermediate mind map format for exchange between systems.  We tested our import using Freeplane, which is a fork and likely superset of the Freemind app and format.

The GraphML format has the extension *.graphml and is xml based.  It primarily uses the abstraction of nodes and edges (links).  It allows for a wide variety of graphs, a superset of mind maps.  This includes freestanding nodes, graphs with cycles, and bi-directional graphs.  And of course it allows for typed edges (links, relations) between nodes, while in Mind Map applications such relations are an exception.   The variety of GraphML we have tested on has been produced by yEd, a free 2D java based graph editor available for Windows, Mac and Linux with nice automated layout capabilities. 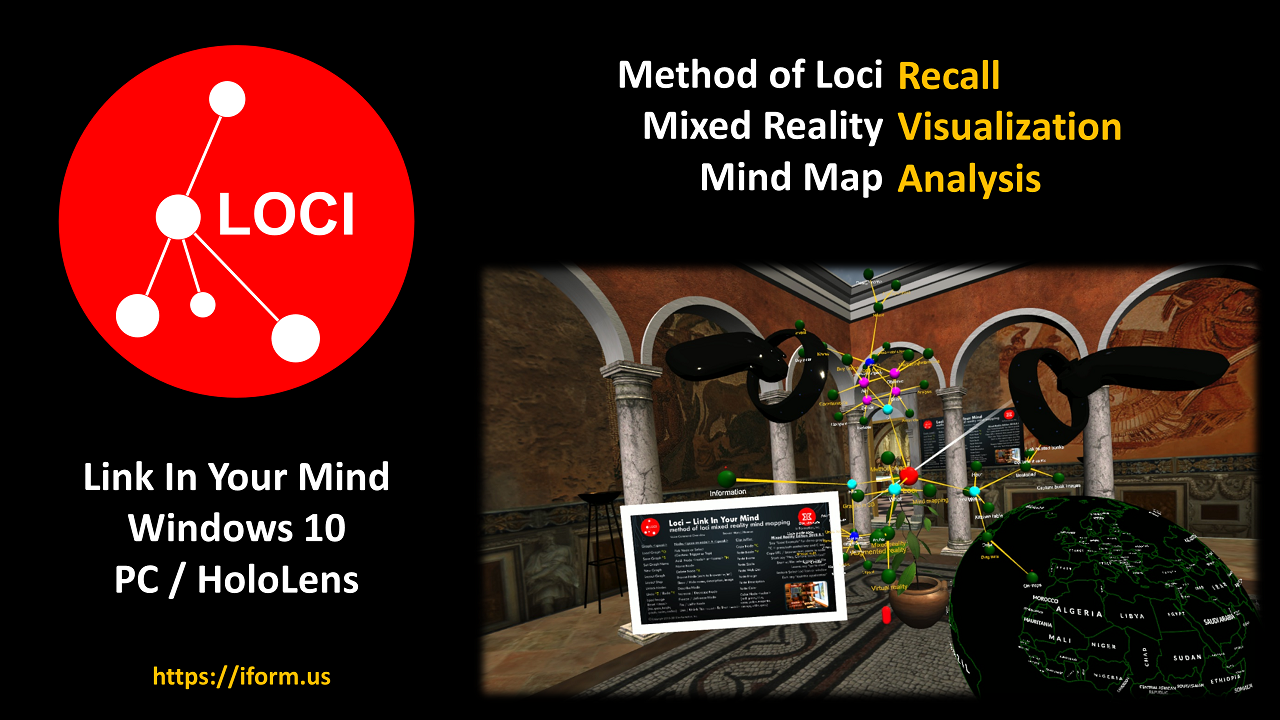 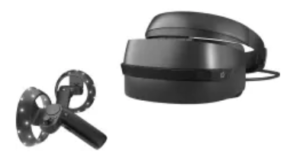 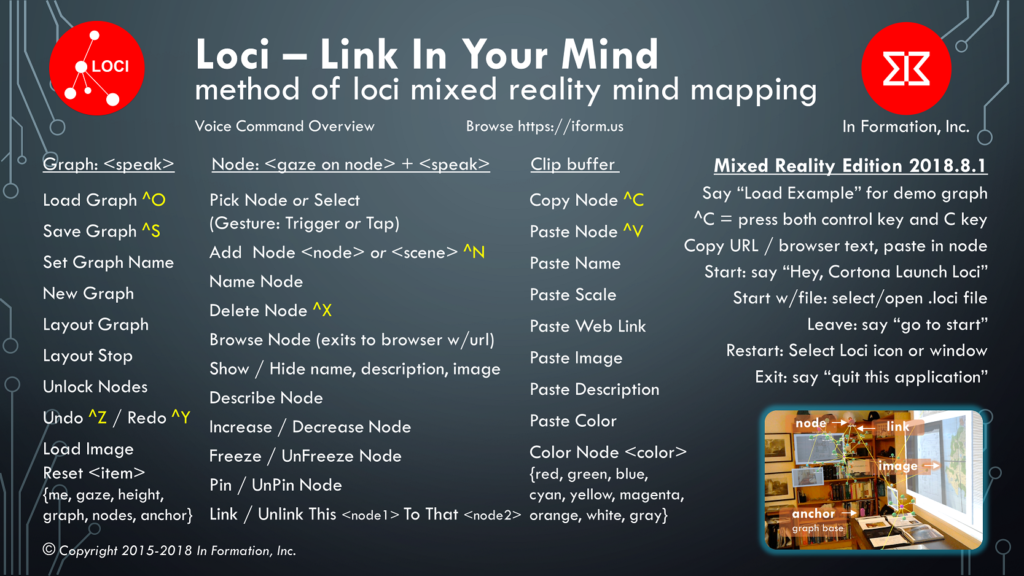 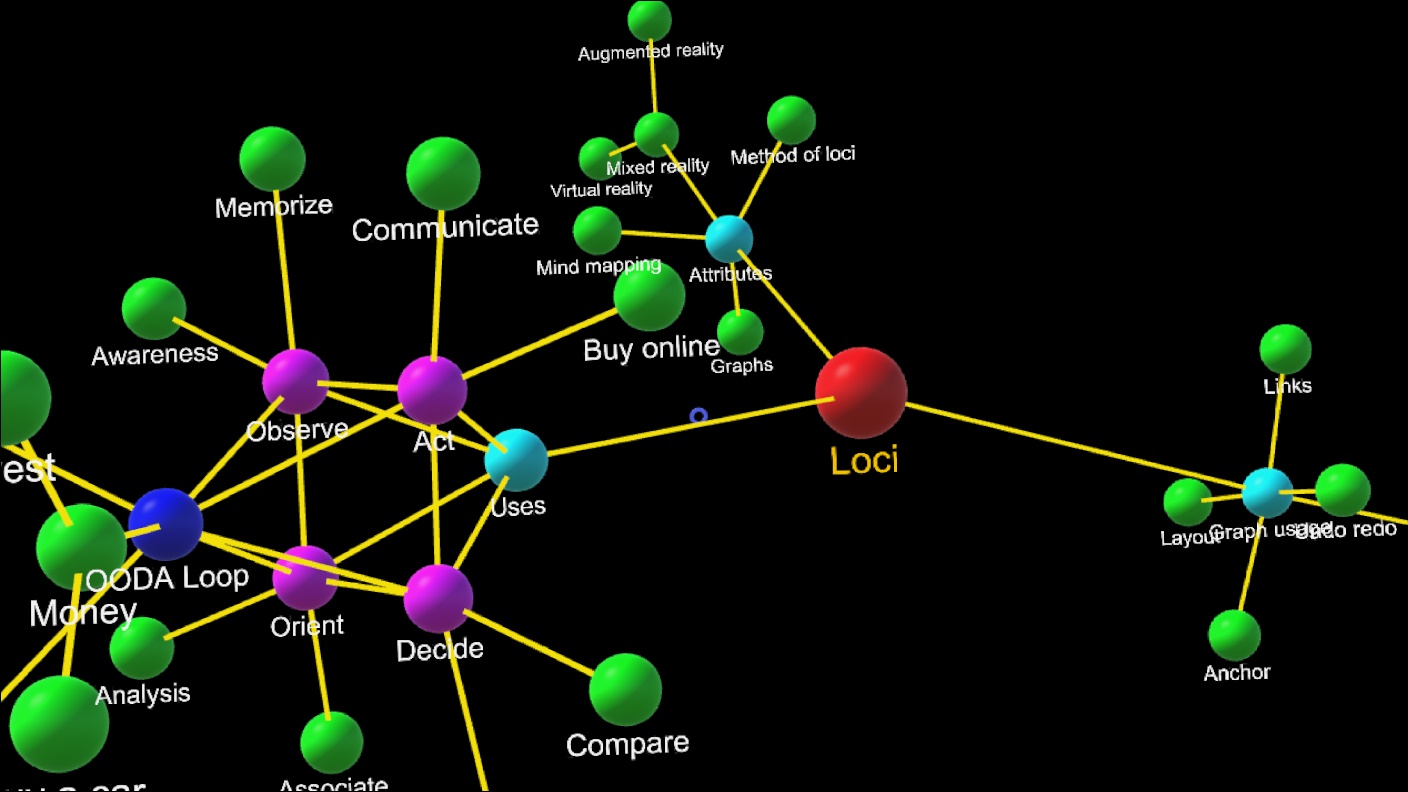 Loci is a general graph editor that supports mind map graphs. Graphs consist of nodes and edges. We call nodes with locations loci, and edges associating loci we call links.

Many items in life can be understood using graphs. From molecules to web page links to friends of your friends, you can think of things as the nodes, and relations between them as the links.

Graphs are used in mathematics, physics, and informatics as underlying representations for solving problems.  Graph data structures are used for 3D games to manage the application of transformations, and Loci itself uses such a scene graph to draw all the things it shows.

Most mind map software requires a central concept node, and links to other nodes, with no node being unlinked, and all being directly, or indirectly connected to the central node.  Loci does not require that.   Nodes can be solitary, or multiply connected.   In this way we support the analysis process from end to end.   You can make unlinked notes for things as you observe them, or your ideas as you come upon them, then orient your thoughts by linking them together to make sense of them.